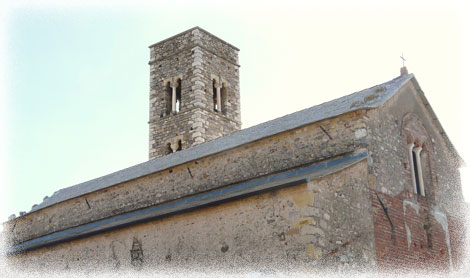 The church of Saint Giorgio is a Catholic place of worship in Albenga, in the province of Savona.

The building is located in Regione Saint Giorgio, inside the fractional cemetery of Campochiesa.

Situated to the inside of the cemetery, the structure was built above a preexisting chapel of the high Middle Ages datable between the 8th and 10th century.
Traces of this primitive church, included within the space of the current nave, are preserved under the floor and incorporated in the first step of access to the presbytery.
Indicated in medieval documents as "San Giorgio de pratis" or "de campora", it was probably founded by the Benedictine order. and was, like other places of worship, the initial dependencies of the Gallinara Island Abbey.

The church contains some frescoes that according to Raineri could be attributed to Antonio da Monteregale, but there is no certainty.

The church was the seat of priory and its parish care extended to many centers of the area, care that decayed during the sixteenth century because of the strong depopulation that occurred in the small neighboring communities; the same parochial center was moved in the church of the Saints Fabiano and Sebastian, in the urban center of Campochiesa.
The building, after a long abandonment in the following centuries, was restored starting from 1901 and again between 1935 and 1936. with a reconstruction of the structure on original elements, in particular the right aisle and the bell tower.
These last architectural elements were seriously devastated by the earthquake. which shook the west coast in 1887.
The church has two architectural styles referable to the Romanesque (the first plant) and the Gothic with the various phases construction clearly visible in the facade, inside and the adjoining bell tower.
The division of the Romanesque interior with three naves with round arches is datable to the twelfth century, while the elongation with two ogival arches dates back to the 14th century.
Among the various cycles of frescoes that adorn the interior (the first dating back to the thirteenth century) of artistic value is in the main apse, the fresco of the Last Judgement of 1446.
The painting depicts, in the section of Hell, famous characters of the Divine Comedy among which Virgil and the poet Dante Alighieri himself, Count Ugolino and Archbishop Ruggieri degli Ubaldini;
This painting is one of the few testimonies of the Dantean tradition of the late Middle Ages in Liguria.
Along the side walls the lower depictions of the Twelve Apostles (six on each side); the Nativity of Christ at the top, on the left side; Jesus enclosed in a large almond tree, at the top, on the opposite side; the Four Evangelists in the vault.
In the left aisle the frescoes of the Madonna with Child and angels musicians between Saints Stephen and Arcadius (?) (XVI century); the Assumption of Mary to heaven; Saints Sebastian, Fabiano and Rocco (votive fresco) from 1476; St. Christopher and figures of Apostles (XIII century).
The apse of the right aisle preserves instead the frescoed cycle with Scenes of life of San Biagio of the XIV century. and of Tuscan art.
In the sacristy the fresco of the Crucifixion of Jesus (15th century). 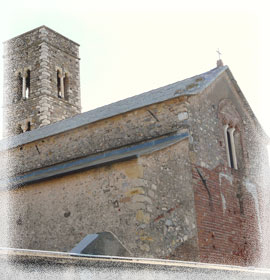 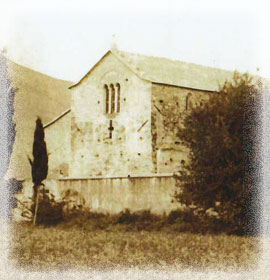 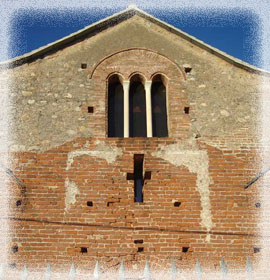 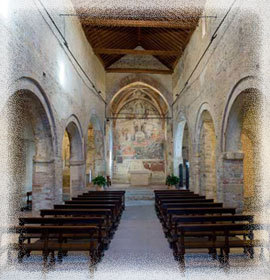 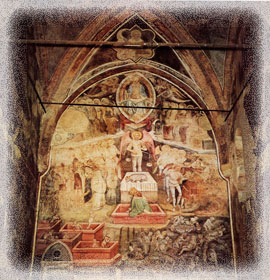 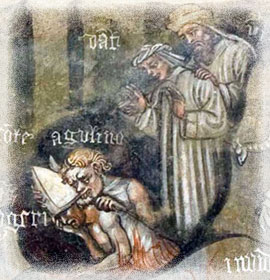 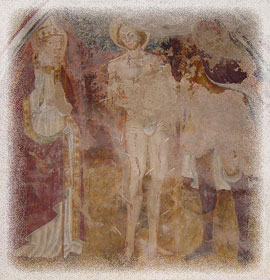 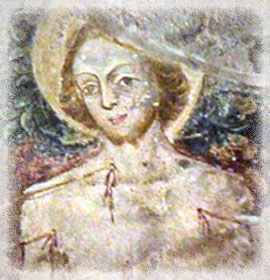 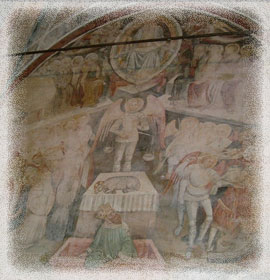 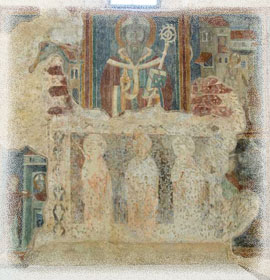 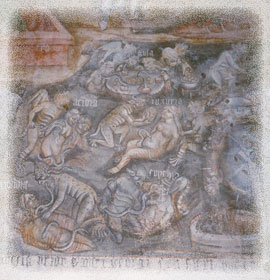 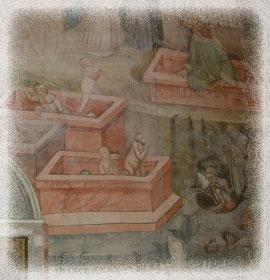