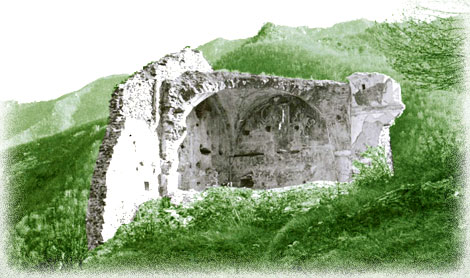 This church of Santa Maria Maddalena, a cemetery chapel, was located on the top of the hill overlooking the village, in the middle of the valley that from S. Bernardo goes down to Albenga.
Abandoned, it suffered serious damage to the structure and today it has disappeared.

The frescoes of the church (what little remained of them) were transported to the town hall of Garessio and restored. in 1974 by Prof. Nicola di Aramengo.
These are thirteen fragments of various sizes in late Gothic style.

Raineri hypothesized at first that Antonio da Monteregale may have worked together with Segurano Cigna for some frescoes, except then to return later on his steps to point out that, despite the stylistic affinities were remarkable among them, the hand of Antonio da Monteregale in this church we have absolutely no matches.
Personally I present this church only as a strong artistic value and to signal it so that it is known.
The only certainty we have is that the artist Segurano Cigna worked here and painted here.

The fact can be deduced from a contract that Prof. Amedeo found in the Historical Archives of Garessino, dated April 1, 1461, where it is described that they were painted by the Monregalese Seguraro Cigna and purchased by the garessina community for the sum of 38 florins: :

The iconographies still readable on the traces of frescoes in the church were: on the left wall: Our Lady of Mercy and the Crucifixion, in a decidedly Provençal style, and under a panel of the Deposition and one of the Resurrection; on the right wall: The Pious Women at the Sepulchre receive the announcement of the Angel, and after the window at the front, also frescoed, the episode of the Magdalene "Noli me tangere". Underneath these figures was represented the Last Supper in a horizontal band, as it is used in many altar frontals, but now only traces of names and faces remain.
In the piece of sail of the ogival vault you can see the base of a throne with the inscription S. Matteo Evangelista.
Some friezes identical to those of Castelnuovo di Ceva still remain intact.
Remarkable is the similarity of these paintings not only in the friezes but in the design and costumes and also in the use of certain colors.

Raineri points out in his work (4) that for him he remembers, for certain affinities of style, drawing and manners, those works painted in the church of Montata in Molini di Triora and therefore he initially attributed them to Antonio Monregalese.

The affinities of the stylistic elements preserve their validity and now it remains to explain the similarity between the art of the two painters, almost contemporary, and above all the influence of Provençal art in Segurano, which we find outstanding both in Cerisola and Prunetto, where in the church of the Madonna del Carmine Raineri has found his signature, as Raineri has published (9).
Since the document speaks of capelam ecclesiae, there is nothing to suppose that other artists, including Antonio, may have worked in such an important cycle of frescoes.
Antonio Monregalese who in 1435 signed the frescoes of Molini di Triora, must have been an artist already established in his land, to be called to work in a valley so rich in artistic evidence, and signing de Monteregali.
The same does Maestro Segurano in Prunetto in 1478 adding also the surname:

This artist, according to the news reported by Lobera in his Dissertation, already enjoyed a certain fame in 1454:

If Antonio, who was almost certainly older, has returned to the Monregalese, as the paintings of Castelnuovo di Ceva make him think. and the dragons painted in the banners of S. Croce in Mondovì, certainly they had contacts or worked together, or later on in some important fresco cycle.
As for the Provençal manners of Segurano, both in Cerisola and Prunetto we find the Crucifixion reduced to the characters essential: the Crucifix, the Madonna and St. John.
In this iconography also the Magdalene at the foot of the Cross often appeared.
The cult of Magdalene, whose main centers were Provence (Sainte Baume Cave near Saint-Maximin) and Burgundy (Acropole clunisienne de Vezelay) triumphs in Cerisola.
In the frescoes of Cerisola you can still see two episodes of the legend of Magdalene associated with the life and passion of Christ: The Myrophores, the pious women who go to the tomb and find it empty and uncovered.
An angel warns them that the one they are looking for is no longer here; the other episode is that of the first apparition of Christ. in the guise of the Gardener: Noli me tangere.
The iconographies still readable according to Raineri were: Our Lady of Mercy, the Crucifixion, with two panels underneath: the Deposition and Resurrection, the Myrophores, Noli me tangere, with the Last Supper underneath in a long band.
In the sails of the vault the Evangelists.
Several friezes still remained intact and at the top of the window a female face and the coat of arms of Garessio.
Since the document found speaks of Venetibus pond deaurato de Venetibus that was used in the haloes, and in the remaining paintings this does not appear; remains still a hypothesis: that the chapel painted by Segurano, has been destroyed.
Both Antonio and Segurano must have belonged to that school, or workshop, Monregalese to which we must also trace back that Raimondo from Mondovì, that in 1444 we find in Genoa involved in a cause of default, Luigi d'Embruno monregalese who in 1450 painted in Savona, Giacomo from Ceva in 1439 at Lisio, Frater Enricus in 1451 in Piozzo, Angelo Vincenzo from Ceva in 1451 in Mursecco, Sirio from Sale Langhe in 1455 in Morozzo, Giovanni da Aimo monregalese in 1475 at Mondovì Carassone, and towards the end of the century Giovanni Mazzucco from Mondovì.
Many other artists have stayed or transited in these regions, and certainly the Biazaci brothers of Busca who in 1474 we find in Albenga, Bernardo Borgogno di Cuneo in 1442 in Pietra Ligure, Giovanni Canavesio di Pinerolo in 1483 in Pornassio, and that John Baleison of Demonte who worked with him in France and perhaps even in these regions.
The various manners and styles, rather than interpenetrating, overlapped, often coexisting side by side and mixed according to the artists' inspiration, giving shape, as Raineri has already said several times, to that Art of the Alps defined by very precise and distinct characteristics.
This art, considered coarse and poor and often liquidated with a few words, today represents a priceless heritage of culture and faith, traditions and history.
Certainly can not be considered poor the language that speak the ancient sacred representations of S. Croce and S. Bernardo delle Forche in Mondovì unique in Gothic painting of the time, or the even more remote testimonies of S. Elena a Torre, S. Pietro a Mombarcaro and many others better known!
These paintings were very often due to the community of the place, and this art was not supposed to amaze, but to teach, even with the word where the symbol became more complex, incite the terror of sin or narrate in a naive and picturesque way, to the poor people of these districts, the lives of those saints to whom they turned daily for protection against the calamities that troubled their harsh existence. 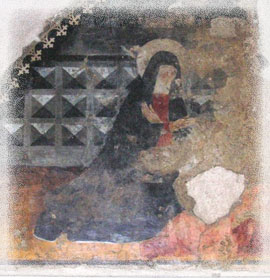 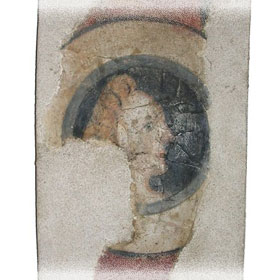 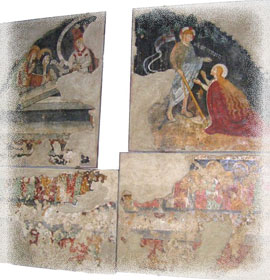 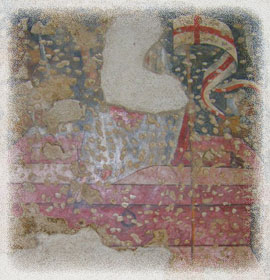 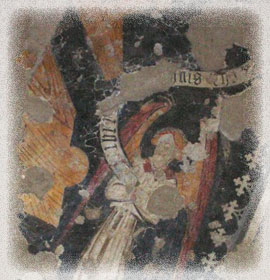 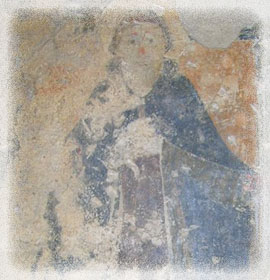 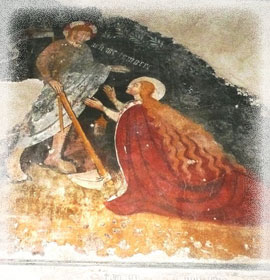 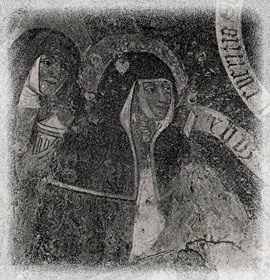