THE FRESCOES ON THE RIGHT WALL 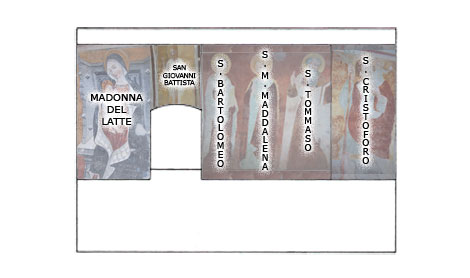 The first fresco on the left is that of Madonnina del latte (fig. 1), which in my humble opinion is the most beautiful and alone would amply repay the visit to the chapel for its extraordinary beauty and simplicity.

If the painting of S. Croce a Mondovì Piazza, executed by the same artist, is a triumphal hymn to the majesty of Christ and his Passion, this one of S. Bernardo is; a harmonious and tender song to the motherhood of Mary.

The Dantean greeting of St. Bernard: "Virgin mother..." finds on its walls a humble and high testimony of humanity; and poetry in the figures of the Virgin, portrayed in the loving act of nursing the Child Jesus.
The Madonnina del latte that can be admired on the right wall recalls the Greek "galakto-trophousa" of Slavic icons, but the necklace with the coral pendant hanging on the Child's chest is echoed by the Nordic-Provençal manners.
The throne repeats in the drawing and colors that of the polyptych of Molini di Triora and the other cycles already mentioned.
The verticalism of the figure, the sinuous movement of the folds of the mantle give this painting a grace and elegance touching and very solemn at the same time.
In the fresco below there are many signs (fig. 8).

After the panel of the Madonnina del latte, in a small box above the window, we find a recurring iconography in the chapels, that of S. John the Baptist (fig. 2), also it however painted in later epoch and we would say rather badly compared to other works.

Those that instead are of interest are the three following panels (fig. 3), that even if very ruined show still quite defined the figures (starting from the left of S. Bartholomew (fig. 4), S. Mary Magdalene (fig. 5) and S. Thomas (fig. 6).

If these Saints were not recognizable, for their traditional iconography, (St. Bartholomew with the knife in his fist, with which he was flayed, Magdalene with the jar of aromas for the embalming of the body of Christ, St. Thomas with the index finger of his right hand outstretched to touch the plague of Christ), the graphite invocations by the faithful on their coats would be enough to identify them.

The last panel represents the iconography of S. Christopher (fig. 7): a giant image resting on a long stick to carry the little baby Jesus on his mighty shoulders across the river.
This figure was almost always painted very large on the outside wall of churches and chapels, to be seen from afar by the wayfarer or pilgrim passing by, but it was also painted on the inside and generally on the right when entering, as in the chapel of St. Bernard of the Forks.
It was a popular belief that a person would not die of apoplexy or any other sudden accident, on that day when he saw the image of the Saint.

Here are some of these colorful popular sayings:


In the chapel of S. Bernardo, as elements of comparison for the attribution to master Antonio, we find the figure of the Virgin, very close to that of Campochiesa, while the face of Christ recalls that of the Christ of Piety of Cuspide in the polyptych of Montata.

The date of execution of the frescoes is around 1473 and necessarily before 1478, date written on the mantle of St. Thomas. 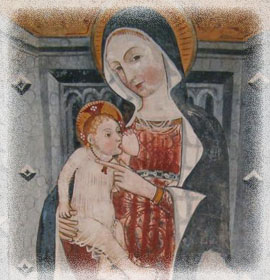 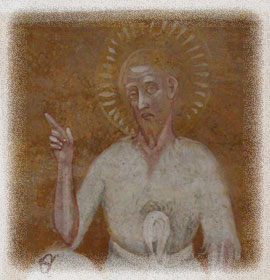 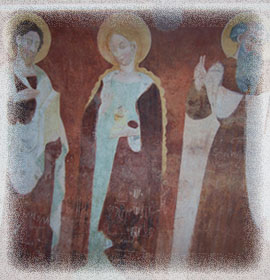 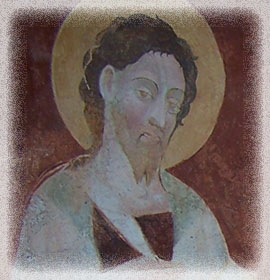 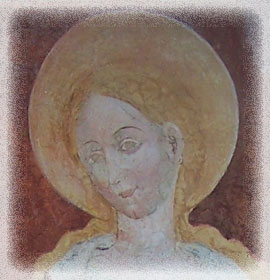 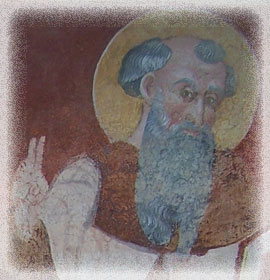 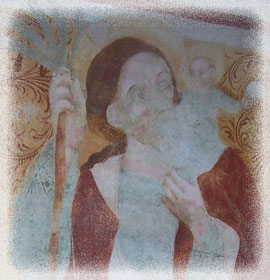 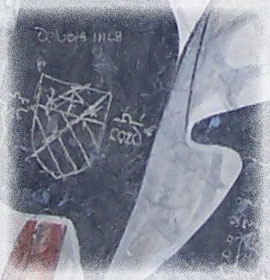