THE FRESCOES OF THE CENTRAL WALL , BEHIND THE ALTAR 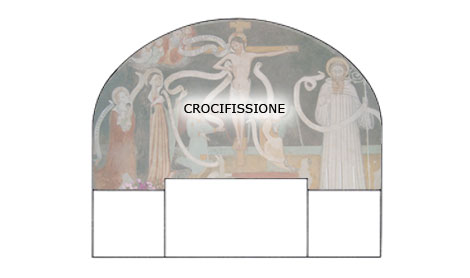 Here the worship of Mary's breasts is part of a wider and more complex composition that can be defined as a real sacred popular representation, where the dialogues of the protagonists are well imprinted on the wall through white and fluttering scrolls.

This depiction draws its inspiration from the "Virgin Lactation" that appeared for the first time in a sermon by Arnaud of Chartres, abbot of Bonneval, friend of St. Bernard of Clairvaux, and in the poem of a storyteller from Bayeux, entitled "Advocate Notre Dame" :

The Madonna intercedes for the dead man (fig. 5), lying at her feet, showing her naked breast to her Son (fig. 4) who she nursed and who is now crucified on the Cross.

Jesus Christ (fig. 3) with his right hand detached from the cross offers the blood that flows from the wound of his side, for the salvation of man.

The Son in turn turns to the Father, who appears on the clouds among the ranks of the angels (fig. 6).
We note that the figure of the Father is clearly reminiscent of that of the frescoes in S. Croce.

The question of the Son is as follows: "Voluere quesso pater quod rogitat mea mater".
The Father replies, that to such an intercessor he cannot deny anything: "A te petita dabis quo vis tibi nulla negabo" (fig. 8).

Also in these writings we can see the incomplete mastery of Latin spelling, which we find in the various cartouches examined and that we find in the same signature of master Antonio.
Perhaps Antonio da Monteregale did not know Latin too well, but on the other hand he knew how to paint really well.

Victor Henry Debidour (35) writes in his volume about a painting, dated 1525 die 29 luio, coming from a chapel of the Penitents:
" Nostra Dama de Secours, avocatrix pecatour , this is the name, a mixture of Provenēal and Latin of this painting that presents us with a moving revival of pleas, from the donor to Mary, from this one to the Son who nourished, from the Son to his Father, commented by a text that explains the plastic composition of the subject, and the views of the religious who suggested it".

Here is the translation: man has an assured audience with God when he presents his Son before the Father and the Mother before the Son: the Son shows his side and his wounds, the Mother his breast and his breast: no request can be refused, where so many signs of love are present.

The quotation of the Debidour explains substantially also the iconography, which however is dated much earlier than the painting of 1523, and is closely related to the figure of St. Bernard of Clairvaux, and therefore of inspiration and purely Franco-Provenēal theme.

On the sides of the Cross two angels (fig. 9 and 10) hold the scrolls now illegible; at the end of the one held by the Virgin, there are some friezes, very ruined, similar to those of Farigliano.

Behind the Virgin is S. Barbara (fig. 11) holding a turreted castle. In the scroll it reads: S. Barbara now pro[nobis].

On the right in the white monastic dress of the Cistercians there is the majestic figure of S. Bernardo, who with his right hand blesses and with his left hand holds the crosier (fig. 8).
The face of an old man with a flowing beard is very reminiscent in color and design of the Father of the Trinity of Chiusa Pesio.

Curiosity :
1) The photo in Fig. 1 is shown in the version before the restorations (photo from the 1970s), to show the difference from the current state (fig. 2).
2) The photo of fig. 12 is taken from an old black and white publication for the realization of the new altar, which bears the inscription "New altar, sketch and realization by Geronimo Raineri". 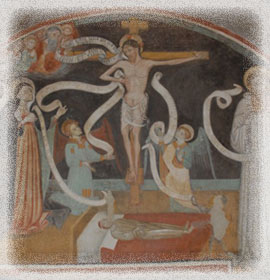 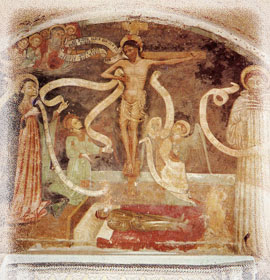 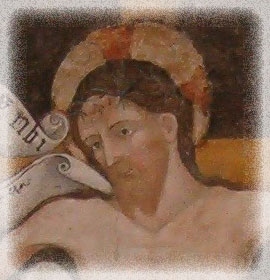 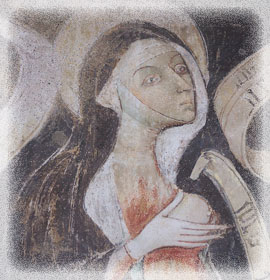 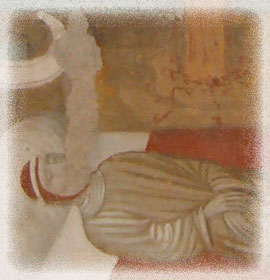 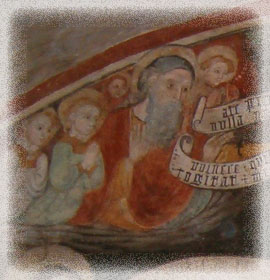 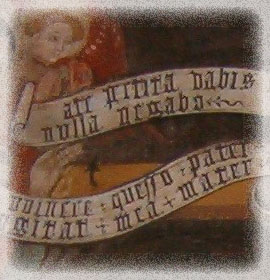 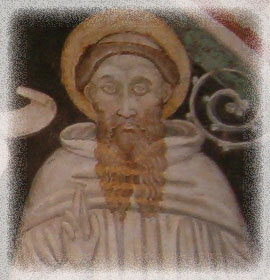 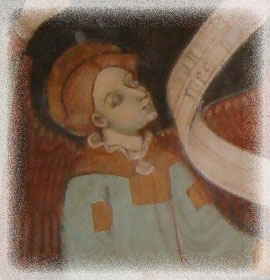 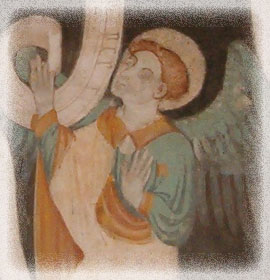 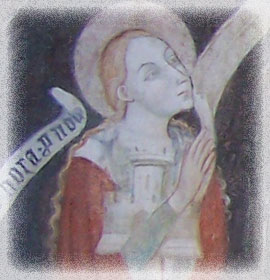 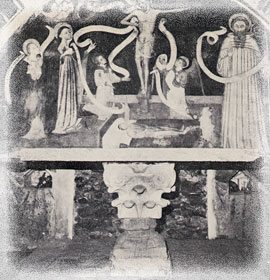