THE FRESCOES ON THE LEFT WALL 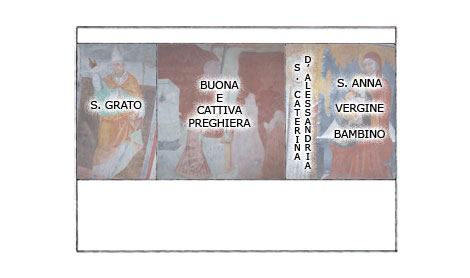 
On the left wall (fig. 1), starting from the right side, is represented the beautiful double maternity of St. Anne and St. Mary.

It is extraordinary the beauty of this painting, which is composed in a pyramidal form of loving protection: Saint Anne holds in her arms the slender and youthful figure of the Holy Virgin, who breast-feeds her Child.

Next to this panel is represented Saint Catherine of Alexandria (fig. 2).

In the central panel (fig. 3) instead we find a particular iconography, defined with the name of "Good and bad prayer".

In the center of the fresco (unfortunately very ruined by time) stands a Crucifix in the background of a landscape mountain with woods and houses.
To the left of Christ (right for the viewer) è kneeling a religious man in monastic habit.
White lines come out of his mouth, symbols of prayer, which reach the wounds of Christ and are therefore welcomed.
On the right kneels a layman, bourgeois or noble, and the white lines coming out of his mouth are folded and do not reach the body of Christ, i.e. prayer is rejected.
Behind this figure is always represented a large building; from the large windows you can see inside the people intent on everyday work. These interior details are reminiscent of Flemish manners.
Two other almost identical representations of this theme can be found: one in the chapel of St. Sebastian in Venanson, the work of Baleison di Demonte, and the other, unfortunately badly repainted, in the Chapel of S. Bernardo of Aosta, in Pamparato.
To note (it is a curiosity) that the crucifix is pierced by an iron bar that strikes him almost near the side. It's just a random correspondence because the rod for the consolidation of the structure is fixed to the wall by a recent concrete casting.

The last panel shows S. Grato (fig. 4) , in Episcopal clothing, holding the head of St. John the Baptist.
The painting is from a much later period, and perhaps a clumsy remake of the original iconography. 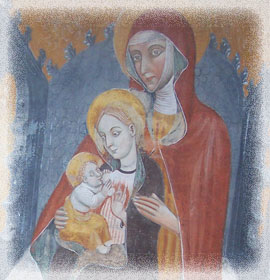 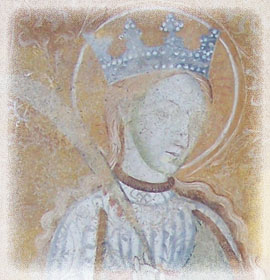 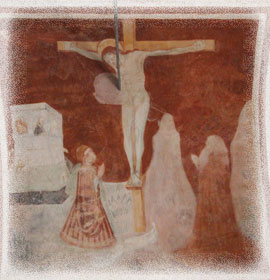 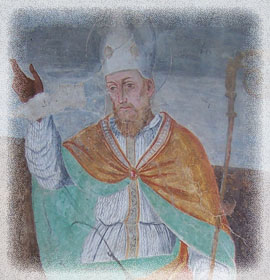