THE HISTORY OF THE CHAPEL

Brief history of the chapel based on the very little information that is known. 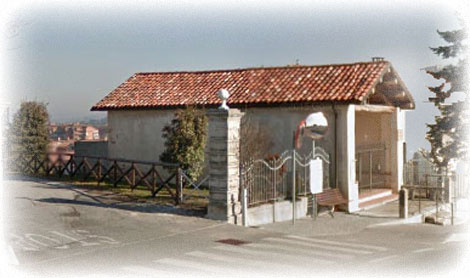 The chapel of San Bernardo delle Forche is located in Mondovì (CN) in the road that goes from the city to the newly built civil hospital, about one km away from the city center (see map).

Nowadays the chapel is incorporated in the city of Mondovì but you have to think that a few decades ago the little church was surrounded by meadows and vegetation.
The street in front of it, while now it is mainly the street that connects the city with the new Hospital, was once the main road to Cuneo, and in ancient times it was called the "Morozzenga".
The Nuns of Pogliola at that time in 1513 bought it from a certain Guglielmo Brunetto (who had in turn bought it from the City of Mondovì for 200 ducats of Savoy).
Evidently the chapel was owned by the Cistercian nuns of Pogliola, a hypothesis born by the fact that it is dedicated to Saint Bernard of Clarivaux, of the same Benedictine order.

The small church is now part of the parish of Santa Maria Maggiore in Mondovì, a village called Ferrone and has been owned by the Superintendence of Cultural Heritage for many decades.

The chapel is called "of the Forks", because on the small hill where it is located, once stood the patibulum for the executions of those sentenced to death, elevated area from today's Altipiano and Ferrone districts, and could be comfortably seen from Mondovì Piazza, what was the urban center of the city at that time.

The confirmation of this fact can be found in the figures of hanged men that we find roughly engraved on the walls accompanied by short prayers and invocations to the patron saints of good death that are depicted in the frescoes.
Another confirmation of all this is the fact that many decades ago, when the floor of the chapel was being remade by the previous owners, many skull and bone remains have been found.
Being on a connecting and passing road, the chapel was certainly very frequented by pilgrims and wayfarers; they too have left traces of their passage in the numerous graffiti inside the chapel.
That it was then a road frequented by wayfarers is also confirmed by the iconography of St. Christopher on the right wall.

The small chapel still retains its original shape, with the porch in front with a truss roof, which then covers the entire chapel.
Inside the ceiling is barrel shaped.

Both the front wall of the altar and the two side walls are covered with frescoes covering an area of about m2 33.

The small chapel has managed to save itself from renovations and whitewashing and is now lovingly guarded by the inhabitants of the village and the various massari (people who are the guardians and custodians of the chapel) who have followed one another over the years, who have consolidated their external structures in a truly praiseworthy manner.
The iconographic jewel it contains is now rightly exhibited with great pride !
Our people sensitized to true and authentic things still show the spirit and faith of their distant ancestors alive and deep.

At the end of the last century, thanks to the strong interest of some inhabitants of the village and the contribution of a credit institution, the chapel has seen the rebuilding of the roof and its further consolidation.

A few years ago (2001) the frescoes have suffered a necessary restoration; on the page concerning the central wall you can see photos of the situations before and after the intervention.

Lately in May 2009 was performed the remake of the road in front of it that goes to towards the new Regina Montis Regalis Hospital (and the rebuilding of the sidewalk of the chapel), operation that for the chapel has involved the modification of the access stairs, replaced by a more solemn cementified staircase that has changed the physiognomy of the entrance (in my modest personal opinion making it much worse): in the photos of this page you can see the situation before the remake.

Nowadays the chapel, normally closed to preserve its beauty, lives a few days (and more precisely a few hours) per year of opening.

On the one hand it is occasionally opened during guided tours organized and on the other hand in the most significant annual fixed appointment, which is the festa di San Bernardo, usually celebrated (not always) on the Sunday next to the date of 20 August, the anniversary of the Saint's death and the day on which it is celebrated his feast.
In the days before the church also opens in the evening for the novena of Rosario, announced by a nice little and brief ringing of bells from a nearby chapel that resonates in the evening silence of the outskirts of the city.

Here is the sound of the bell announcing and calling the inhabitants for the rosary :

Afterwards, on the Sunday of the feast, in the morning the Saint Mass is celebrated inside, presided over by the parish priest of the parish of Ferrone.
Following a beautiful tradition consolidated over time, the blessing of tractors, as a wish for a good harvest and request for protection for the workers of the fields, and to follow usually a moment of celebration and greeting among the inhabitants of the area with traditional distribution of the mythical 'torcetti', moment that (even here, if possible, we try to keep the tradition) is "concretized with a happy dinner (or lunch) with all the inhabitants of the neighborhood in the days to follow.
Still in the following days, usually as the last act of the celebrations of the feast, a small prize draw of a lottery 'familiar' organized with much effort by the massari of the chapel, to consolidate even more the bond between the inhabitants of the area.... and a greeting and goodbye to next year's feast ! 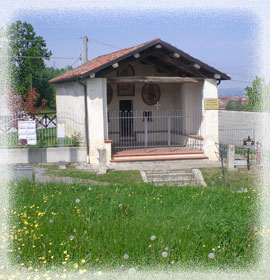 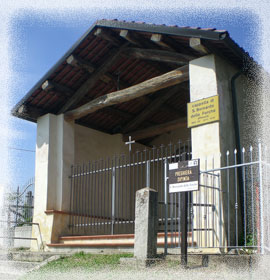 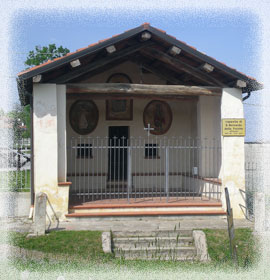 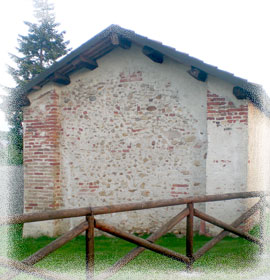