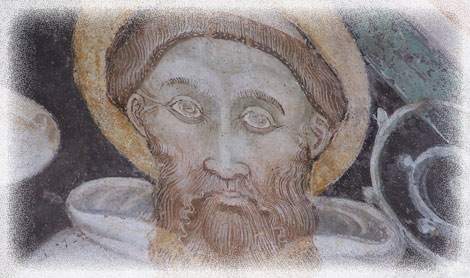 Abbot of Clairvaux , in Latin Bernardus Claravallensis, Italianized in Bernardo of Chiaravalle.

He was a French monk and abbot of the Cistercian order.
Founder of the famous Clairvaux Abbey and other monasteries.
He is venerated as a Saint by the Catholic Church, the Anglican Church and the Lutheran Church.
Canonized in 1174 by Pope Alexander III in the cathedral of Anagni.
He was declared a Doctor of the Church by Pope Pius VIII in 1830.
In 1953 Pope Pius XII dedicated the encyclical "Doctor Mellifluus" to him.

It is celebrated on August 20.

There is a lot of information about the life of St. Bernard of Clairvaux on the internet.
At the bottom of the page there are some links (*) where you can find a lot of material about her biography, her writings, her works and his thought.

Personally I just report this piece, taken from a General Audience of Papa BENEDETTO XVI of some years ago :

" Dear brothers and sisters, Today I would like to speak about St. Bernard of Clairvaux, called "the last of the Fathers" of the Church, because in the 12th century, once again, he renewed and made present the great theology of the Fathers.
We do not know in detail the years of his childhood, but we do know that he was born in 1090 in Fontaines, France, in a large and discreetly wealthy family.
As a young man, he devoted himself to the study of the so-called liberal arts - especially grammar, rhetoric and dialectics. at the school of the Canons of the church of Saint-Vorles, in Châtillon-sur-Seine and slowly made the decision to enter in religious life.
Around the age of twenty he entered Cîteaux, a new monastic foundation, more agile than the ancient and venerable monasteries of the time and, at the same time, more rigorous in the practice of the evangelical counsels.
A few years later, in 1115, Bernard was sent by Saint Stephen Harding, the third Abbot of Cîteaux, to found the monastery of Clairvaux.
Here the young Abbot, who was only twenty-five years old, was able to refine his conception of monastic life and to commit himself to putting it into practice.
Looking at the discipline of other monasteries, Bernardo strongly recalled the need for a sober and measured life, in the canteen as well as in clothing and monastic buildings, recommending the sustenance and care of the poor.
In the meantime, the community of Clairvaux became more and more numerous and multiplied its foundations.

In those same years, before 1130, Bernardo started a vast correspondence with many people, both important and of modest social conditions. To the many letters of this period must be added numerous Sermons, as well as Sentences and Treaties.
Bernardo's great friendship with William, Abbot of Saint-Thierry, and William of Champeaux, some of the most important figures of the 12th century, also dates back to this time.
From 1130 onwards, he began to deal with many serious questions of the Holy See and the Church.
For this reason he had to leave his monastery more and more often, and sometimes outside of France.
He also founded several women's monasteries, and was the protagonist of a lively correspondence with Peter the Venerable, Abbot of Cluny, which I spoke about last Wednesday.
Above all, he would say his polemical writings against Abelard, a great thinker who started a new way of doing theology, introducing above all the dialectical-philosophical method in the construction of theological thought. Another front against which Bernard fought was the heresy of the Cathars, who despised matter and the human body, despising, consequently, the Creator.
He, on the other hand, felt obliged to take the defense of the Jews, condemning the increasingly widespread anti-Semitism.
For this last aspect of his apostolic action, a few decades later, Ephraim, a rabbi from Bonn, addressed a vibrant tribute to Bernard.
In that same period the holy Abbot wrote his most famous works, such as the famous Sermons on the Cantico dei Cantici.
In the last years of his life - his death occurred in 1153 - Bernardo had to limit his travels without interrupting them completely. He took advantage of this to revise definitively the complex of Letters, Sermons and Treaties.
It deserves to be mentioned a quite particular book, which he finished in this period, in 1145, when one of his students, Bernardo Pignatelli, was elected Pope with the name of Eugenio III.
On this occasion, Bernard, as a spiritual Father, wrote to this spiritual son of his the text De Consideratione, which contains teachings to be a good Pope.
In this book, which remains a convenient reading for Popes of all times, Bernard not only indicates how to do the Pope well, but also expresses a profound vision of the mystery of the Church and the mystery of Christ, which is resolved, in the end, in contemplation of the mystery of the Triune God and one: "The search for this God should continue, which is not yet sufficiently searched", writes the holy Abbot "but perhaps one can search better and find more; easily with prayer than with discussion.
So let us put an end here to the book, but not to the search"  (XIV, 32: PL 182, 808) , to being on the way to God.

I would now like to dwell only on two central aspects of Bernard's rich doctrine: they concern Jesus Christ and Mary most holy, his Mother.
His concern for the intimate and vital participation of the Christian in the love of God in Jesus Christ does not bring new orientations in the scientific status of theology.
But, more decisively than ever, the Abbot of Clairvaux configures the theologian to the contemplative and the mystical.
Only Jesus - Bernardo insists before the complex dialectical reasoning of his time - Only Jesus is "honey at the mouth, song to the ear, jubilation in the heart (mel in ore, in aure melos, in corde iubilum)".
Hence the title, attributed to him by tradition, of Doctor mellifluus: his praise of Jesus Christ, in fact, "flows like honey".
In the exhausting battles between nominalists and realists - two philosophical currents of the time - the Abbot of Clairvaux does not tire of repeating that only one is the name that counts, that of Jesus Nazarene.
"Arido is every food of the soul", confesses, "if it is not sprayed with this oil; insipid, if it is not seasoned with this salt.
What you write has no taste for me unless Jesus read it to you. And he concludes: "When you discuss or speak, nothing has taste for me, if you have not heard the name of Jesus" (Sermones in Cantica Canticorum XV, 6: PL 183,847).
For Bernard, in fact, true knowledge of God consists in the personal, profound experience of Jesus Christ and his love.
And this, dear brothers and sisters, applies to every Christian: faith is first of all a personal, intimate encounter with Jesus, it is to experience his closeness, his friendship, his love, and only in this way do we learn to know him more and more, to love him and follow him more and more. May this happen for each of us!

In another famous Sermon on the Sunday between the octave of the Assumption, the holy Abbot describes in passionate terms Mary's intimate participation in the redeeming sacrifice of her Son.
"O holy Mother, he exclaims - truly a sword has pierced your soul! At such a point the violence of pain has pierced your soul, that we can rightly call you more than martyr, because in you the participation in the passion of the Son surpassed much in intensity the physical suffering of martyrdom"   (14: PL 183,437-438).
Bernard has no doubt: "for Mariam ad Iesum", through Mary we are led to Jesus.
He clearly attests to Mary's subordination to Jesus, according to the foundations of traditional Mariology.
But the body of the Sermon also documents the privileged place of the Virgin in the economy of salvation, following the very particular participation of the Mother (compassio) in the sacrifice of her Son.
Not for nothing, a century and a half after the death of Bernardo, Dante Alighieri, in the last canto of the Divine Comedy, will put on the lips of the "mellifluous Doctor" the sublime prayer to Mary: "... Virgin Mother, daughter of your Son, / humble and high more than creature, / fixed term of eternal advice, ..."   (Paradise 33, vv. 1ss.).

These reflections, characteristic of a lover of Jesus and Mary like Saint Bernard, still provoke not only theologians but all believers in a healthy way.
Sometimes it is claimed to resolve the fundamental questions about God, man and the world by the forces of reason alone.
Saint Bernard, on the other hand, solidly founded on the Bible and the Fathers of the Church, reminds us that without a deep faith in God, nourished by prayer and contemplation, by an intimate relationship with the Lord, our reflections on the divine mysteries risk becoming a vain intellectual exercise, and lose their credibility.
Theology refers to the "science of the saints", to their intuition of the mysteries of the living God, to their wisdom, gift of the Holy Spirit, which become a point of reference for theological thought.
Together with Bernard of Clairvaux, we too must recognize that man seeks better and finds God more easily. "with prayer than with discussion".
In the end, the truest figure of the theologian and of every evangelizer remains that of the Apostle John, who placed his head on the heart of the Master.

I would like to conclude these reflections on Saint Bernard with the invocations to Mary, which we read in one of his beautiful homilies:
"In the dangers, in the anxieties, in the uncertainties, - he says - think of Mary, invoke Mary.
She never departs from your lip, never departs from your heart; and so that you may have the help of her prayer, never forget the example of her life.
If you follow her, you cannot deviate; if you pray to her, you cannot despair; if you think of her, you cannot err.
If she sustains you, you will not fall; if she protects you, you have nothing to fear; if she guides you, you will not grow weary; if she favors you, you will reach your goal..."